by Chiara Aluigi – Art history books seem to ignore the existence of Dansaekhwa (단색화, also transliterated as Tansaekhwa), which literally means “monochrome painting” and refers to the loosely organised movement that arose in South Korea during the 1970s, a significant moment in modern Korean history.  The end of Japanese colonialism on Korea, followed by Park Chung Hee’s authoritarian rule, led state-planned modernization to pave the way for Korea’s astonishing economic growth. However, human rights abuses were rampant in such pursuit, to the point that Lee Ufan, one of the most prominent exponents of Dansaekhwa, defines the 1970s in Korea as an “oppressive and windowless reality”. Dansaekhwa Art can, therefore, be seen as the “sole heir” to the ideologies pertaining to an era in which hope and helplessness coexisted.

The English transliteration “Dansaekhwa” was used for the first time at the 3rd edition of the Gwanju Biennale in 2000. The at the time curator of the Biennale, Yoon Jin Sup, describes the movement as not influenced by those qualities identified within Western Minimalism: according to Sup, “Dansaekhwa possesses aesthetics traits inherited from specifically Korean cultural sentiments, historical traits and reasoning”. It is characterized by a unique “Koreaness”, uncontaminated from the influence of any other Asian or Western cultures, which is a rather unique feature, considering the current globalized nature of the world.

‍The Japanese audience was the first to acknowledge Dansaekhwa, organising the Korea: Five Artists Five Hinsek, White show, held at the prestigious Tokyo Gallery in 1975. On the other hand, the movement started being recognized within the Western audience only during the last decade, thanks to the 2001’s Lee Ufan’s retrospective at the Guggenheim Museum and to the exhibition Dansaekhwa and Minimalism organized by the gallery Blum & Poe in 2016. 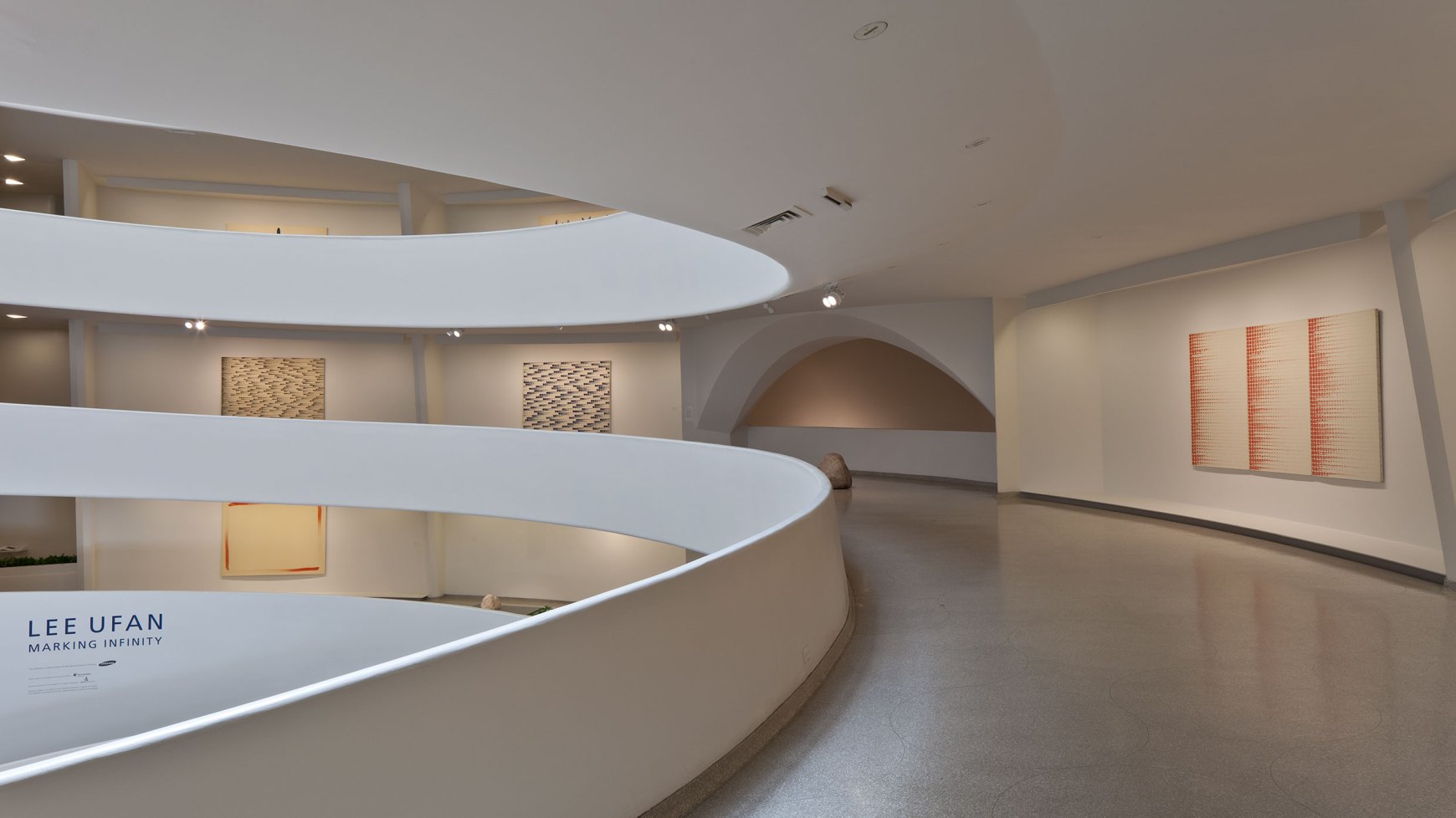 ‍Dansaekhwa artists such as the aforementioned Lee Ufan, Park Seo Bo, Lee Bae and Ha Chong Hyun – whose works have been represented by blue-chip galleries as well as major cultural institutions- sublimated the painful memories of the war and colonialism through a holistic and meditative art, producing an so-called “art form of the mind”. If the past generation had been troubled by the horrible memories of the war, mental illnesses such as anxiety and depression are increasingly suffocating the contemporary man, who is entrapped into a bubble where money and appearance seem to be the only factors determining whether one’s existence can be considered worth it or not. While mental health is an issue too often ignored by society, without specifically addressing such problematic, Dansaekhwa masters seem to address it in an inexplicit way: in fact, their works, soothe the viewer’s preoccupations, acting as a balsam on the wounds.‍

According to the Dansaekhwa master Ha Chong Hyun, the movement was not collectively established, it was rather as if the movement’s exponents were “facing a wall while being in the same room”, in the sense that their works shared the reflections of the same troubled period of their country. However, Park Seo Bo is often regarded as the “founder” of Dansaekhwa: similarly to the Impressionists rebelling to the Parisian Salon, Park went against the conservative style upheld by The National Art Exhibition with its Manifesto Against the Grand Art Exhibition of Korea, in which he sustained the quality of the new abstract form pursued by Korean artists at the time. It must be noted that Dansaekhwa’s abstractions are conceptual rather than purely aesthetic: they are self-sufficient without the implementation of any anecdotal or narrative aspects, offering, at the same time, a peaceful zone of positive energy, purity and spirituality to their viewers. The sincerity – which is one of the most fundamental Confucian values – of the artist plays a fundamental role in determining the quality of the artwork. Furthermore, such sincerity can be achieved only through “the accumulation of time, during which the artist’s mind is thought to seep into the canvas” through the medium he adopts. Korean scholarly tradition stands as the basis for this unique commitment to the art practice itself, ultimately resulting in the disappearance of negative states of mind. According to Park Seo Bo:‍

“Korean scholars back in the day sat in sarang bang(reception rooms), clearing their throats and grinding ink all day. They repeated these mundane actions over and over again. While repeatedly grinding the ink, they found their thoughts and feelings—such as anger—more at ease. Through this repetitive action, they rendered themselves pure and more self-aware.That was their method of removing evil and cultivating goodness to reach purity.” –P.C.B

Ecriture No. 950719 is part of the series Ecritures, started by the artist in the early 90s. Inspired by the Taoist philosophy, according to which men could reach the zen, or purity of mind, through the repetition of the same action, he applied repetitive gestures on the canvas while taking advantage of hanji’s (Korean mulberry paper) malleability and resilience.‍

The medium adopted by the artist plays a fundamental role also in the oeuvre of Lee Bae: the Dansaekhwa master chooses to use the natural material of charcoal, bringing into his artistic practice the meaningful connection between Korean traditions and nature. In Bae’s canvases the black charcoal ink, made with water-fed pigment, passes through the paper creating a unique pattern of brushstrokes.‍

‍Commonly seen as a poor material, during Korean history charcoal was actually endowed by symbolic meanings, as it was considered a protector and purifier. For instance, Korean families used to hang charcoal over the door when a baby was born to ward off sickness. Nowadays, charcoal is still part of Korean cooking techniques: it is used in the making of soy sauce, to prevent bad bacteria from growing during the fermentation process. Furthermore, Lee Bae himself underlines the “richness of this poor material”, which after being applied by the artist on the canvas through wise and solemn gestures, enable the viewer to explore the realm of his mind. Furthermore, the work Issu du Feu, through the dark tones provided by charcoal, creates the perfect meditative atmosphere for the viewer to face his own fragilities. It recalls the ancient Greek concept of παθει μαθς (pathei mathos), which literally means that “wisdom arises from suffering, and that personal experience is the genesis of true learning”. 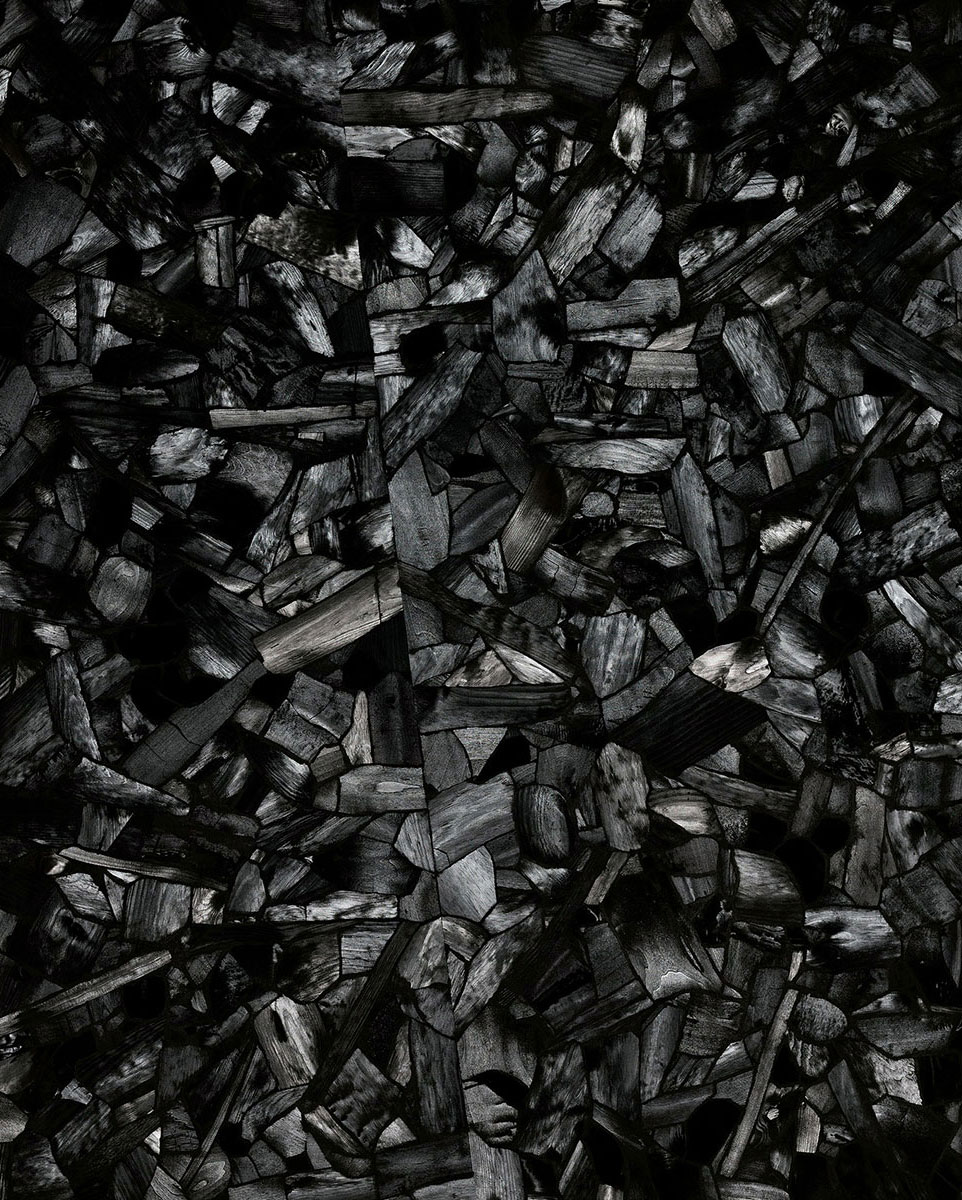 ‍A crucial figure for Japanese and South Korean art scene, Lee Ufan is a pioneer of the former’s Mono Ha and of the latter’s Dansaekhwa. The work From Line no. 800128, greatly summarize the artist’s strengths: an elegant austerity obtained through dedication and meticulous labor. The painting process behind the work, in fact, is visible, with the pigment being denser on a side and fainter on the other. The canvases of the From Line series needs the viewer’s gaze to complete them: the brushstrokes’ movements described by the fading lines on the canvas are, in fact, activated through the act of looking.‍

‍Furthermore, the work From Line no. 800128 can be looked at from different perspectives: from the upper side of the canvas to the lower one, it is as if the Ego of the painting (and of the viewer) slowly vanishes into the void, while from the lower to the upper one, its (his, her) purified soul progressively materialise. It is the concretisation of a catharsis, which is finally materialised through a deep blue, considered as the heaven’s colour. According to art historian Joan Kee, Ufan’s artistic production is characterised by an “aesthetic unselfconsciousness”,which gives for the viewer a new meditative zone of tranquility 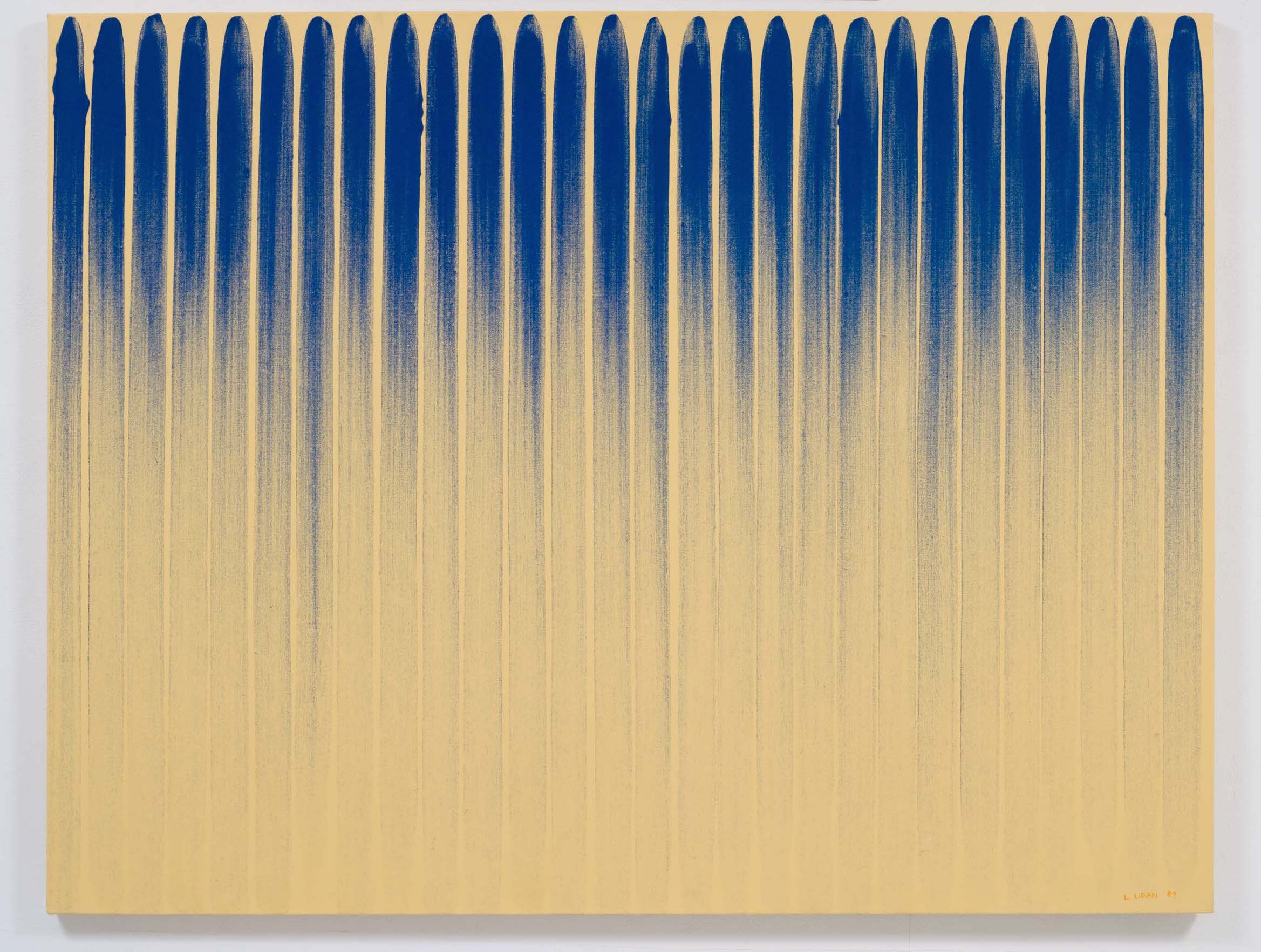 ‍The oeuvre of Ha Chong Hyun brings further the main elements of Dansaekhwa through original and unexpected artistic techniques. Influenced by the turbulent political situation of South Korea at the time, he incorporated into his works a material which was still easily acquirable during such an unstable moment: burlap sack. During the Korean War, in fact, burlap sacks were used by American soldiers to transport goods and it was possible to find them in any markets. Such a “cheap” material assumed a symbolical meaning for the artist, representing the resistance through the pains of the Korean population.

From 1974, the artist started creating his signature works, the Conjuction series, adopting the so-called “back-pressure-method”, which is based on pushing layers of painting from behind the burlap. This manipulation of paint led to its “surpassing” onto the canvas’ surface through the holes of the burlap. Once again, therefore, the spotlight is turned on the medium and, in particular, on its materiality and tactility. Furthermore, similarly to Lee Bae use of charcoal, it must be praised the artist’s ability to create outstanding artwork using a commonly considered “cheap” material. 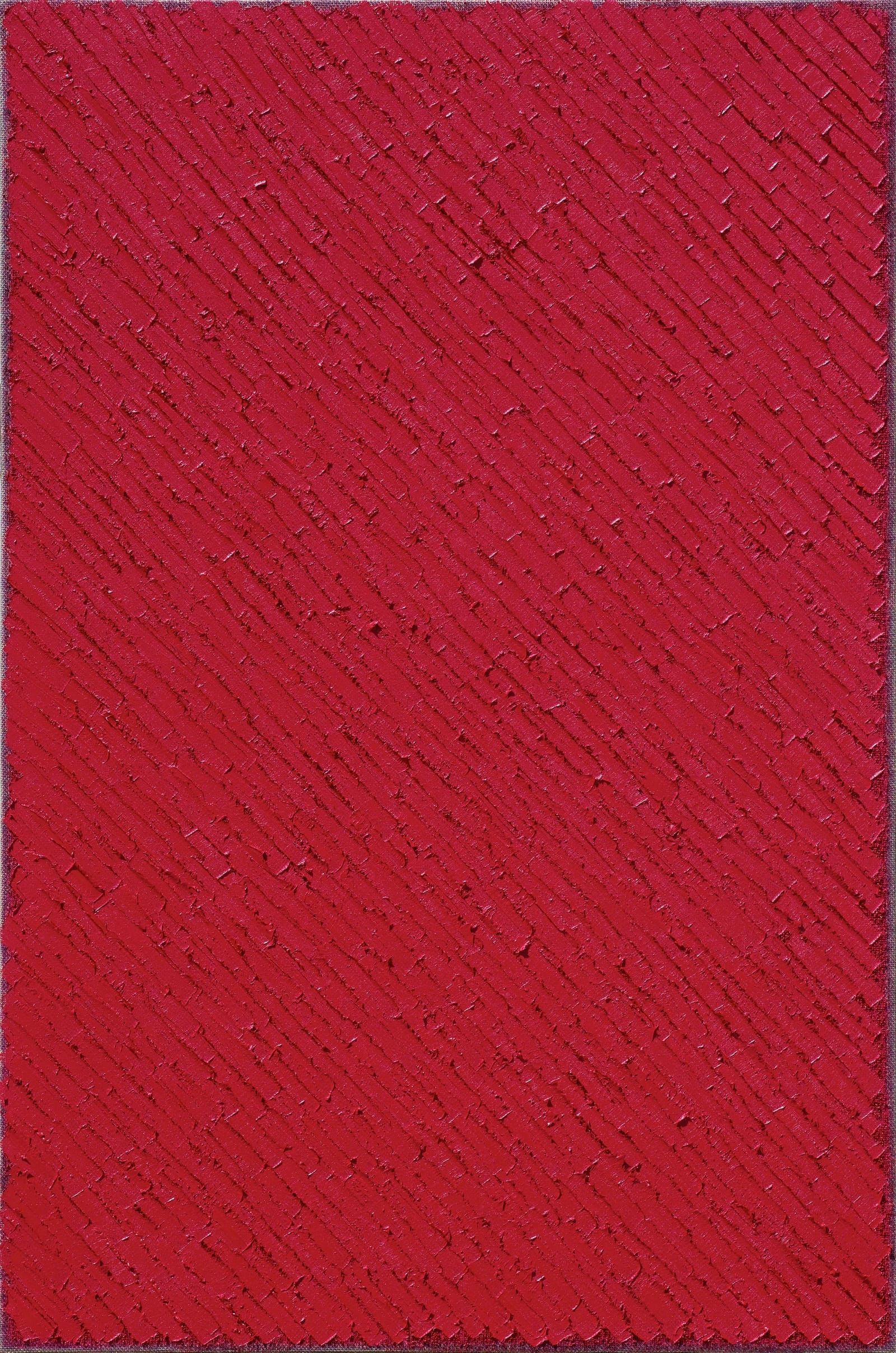 As it can be noticed from the work Conjunction 17-38, the artist began to use colours in his canvas, a phenomenon also happened to Lee Ufan’s From Line series, as can be seen from the work From Line No.79088. The rather captivating reason behind the addition of colours is reported by the Korea Times in an interview with Ha Chong Hyun, who recounts:‍

“About 10 years ago, I encountered the god of the underworld in my dream. He asked me what my profession is and I answered ‘I am a painter’. The god stormed at me with, ‘What kind of painter does not use colour?’ and the remark struck my head”. -HCH

On a final note, Ha Chong Hyun underlined that the right setting is fundamental to enable an artist to truly express himself. Furthermore, he decided to live and work in the countryside rather than in the hectic city of Seoul, affirming that “his greatest mentor is nature itself”, thus recalling once again the fundamental role played by nature and its meditative connotation for Dansaekhwa Art.‍

The reflections on the pains of the past, the unique Korean traditions and the constant presence of nature, are blended together using the talent and constancy of Dansaekhwa artists, producing an art of unprecedented quality and spiritual meaning and enriching to the world the only contemporary art movement that is so purely construed as an ethical practice.